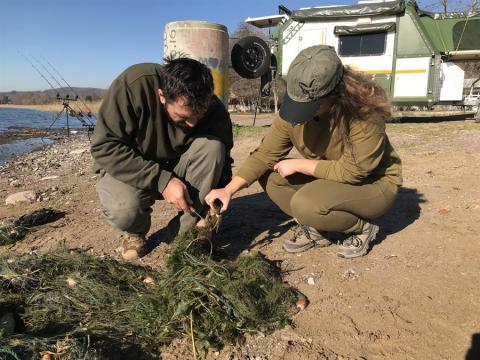 An abandoned fishing net in Lake Sapanca has killed at least 68 wild ducks and hundreds of fish, according to residents of Turkey's northwestern Sakarya province.

The massacre at Lake Sapanca was revealed after a couple practicing sport fishing there found them.

Taha Tarhan and Dilara Azra Tarhan, who took their boats out into the lake due to a pungent smell, encountered many dead wild ducks in the water.

The couple noticed that wild ducks were caught in a line made of fishing net, popularly known as the "ghost net."

Collecting the ghost net with their own efforts, the couple have seen hundreds of rotten dead fish, including pike, carp and rudd.

"We came here to camp. Due to the bad smell coming from the lake, my wife and I took the boat and sailed through the lake. When we arrived in the middle of the lake, we started to see dead ducks floating in the water," Taha Tarhan said.

"We couldn't believe our eyes when we started to pull the fishing net. Dead ducks were coming as I pulled it. The length of the ghost net was about 300 meters. When we came to the end of the net, we took 68 dead wild ducks out of the water," he added.

"Fish, ducks and other living are creatures that maintain the natural ecological balance of this lake. Sapanca Lake will be destroyed when we destroy them," he noted.

Another sporting fisherman, Dilara Tarhan, said she couldn't hold her tears when she saw the drowning ducks.

"From time to time we meet people trying to fishing with a ghost net and who give up because they see us. We tell them what they do, but they don't want to understand," she said.

Meanwhile, an investigation was initiated by the Sakarya Governor's Office regarding the incident.