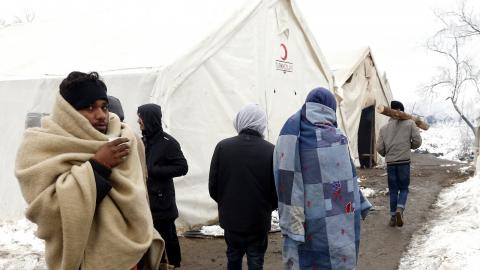 The latest report from Human Rights Watch, published on Tuesday evening, says that discrimination and violence against minorities, domestic violence, pressure on media and problems with dealing with the wartime past continued to be major issues for Balkan states and Central Europe last year.

The report's focus on the global level is China, whose leaders "view human rights at home as an existential threat", according to Human Rights Watch.

The report was supposed to have been published earlier on Tuesday, but Human Rights Watch's executive director Kenneth Roth was barred from entering Hong Kong for the launch.

Meanwhile the report says that the authorities in Bosnia and Herzegovina, Greece, Croatia, Hungary, Kosovo, Serbia, Poland and Turkey are still failing to make significant progress to improve the human rights situation in their countries.

Lydia Gall from Human Rights Watch said that curbs on media freedom and attacks on and harassment of journalists remain a problem in the Balkans, as well as a lack of effort to push forward war crimes prosecutions.

"Part of the slow progress in human rights protection boils down to a lack of political will on the part of authorities to prioritise human rights," Gall told BIRN.

"Balkan countries need to step up their efforts in addressing outstanding human rights concerns, especially in light of their aspirations to join the EU," she added.

According to the report, Bosnia and Herzegovina in 2019 "saw...