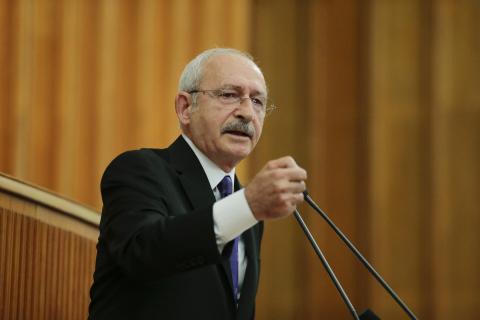 Turkey should play a mediation role between the two rival camps in Libya better instead of siding with one of the parties, the main opposition leader has said, urging the government to repair ties with other regional actors Syria, Israel and Egypt.

"We have already urged the government not to follow the Syria policy in Libya. We told them not to support one side but try to mediate between the fighting parties. Turkey has always followed this policy, between Iran and Iraq etc. Turkey should embrace all the parties in this region and exert efforts for peace," Kemal Kılıçdaroğlu, the leader of the Republican People's Party (CHP), told his parliamentary group on Jan. 14.

Instead of trying to play the role of an honest broker, the government has chosen to be part of the conflicts in the region which has caused tremendous damages on Turkey, Kılıçdaroğlu said, referring to the government's Syria policy since 2011.

"Can somebody with a piece of wisdom explain to me what advantages Turkey has got in Syria? We host 3.6 million Syrians and we have spent $40 billion. The government is concerned of around one million more refugees from Idlib," he stated.

The CHP leader suggested the government to talk to Syrian leader Bashar al-Assad and establish dialogue with Egypt and Israel so that Turkey could better claim its rights and interests in the region.

He recalled that the CHP has supported a memorandum of understanding with the Government National Accord of Libya for the delimitation of the maritime jurisdiction zones in...