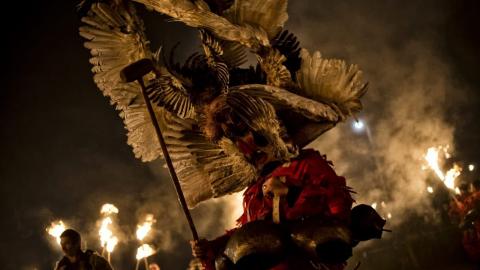 Despite the cancellation of the main Surva festival in the town of Pernik this year because of a water supply crisis, Bulgarians took to the streets independently at the weekend in elaborate 'kuker' costumes for their annual winter carnival.

Celebrations went ahead in villages like Kosharevo, some 30 kilometres from Pernik, which is so devoted to the event that it has its own Mask Museum.

The performances of the traditional 'kukeri' dancers are believed to banish evil spirits.

Among the kukeri are a series of characters including Dionysus, the god of wine and festivities, and his satyrs. It is believed that in ancient times, the old Thracians held the Kukeri Ritual Games in honour of Dionysus.

The main Surva festival has been held in Pernik since 1966, but was cancelled this year because the town, often associated with the mining and machinery industries, has been struggling with its water supply for two months after the nearby Studena dam dried up and the authorities imposed water restrictions.

The issue led to the arrest of Minister of Ecology and Water Neno Dimov, who eventually resigned.

Pernik's mayor Stanislav Vladimirov has promised that the budget for this year's cancelled carnival will be added to the 2021 event to make it even bigger.

A 'Kuker' during the carnival celebrations in the village of Kosharevo, some 60 kilometres from Sofia. Photo: EPA-EFE/Borislav Troshev

'Kuker' mask dancer during the carnival celebrations in the village of Kosharevo. Photo: EPA-EFE/Borislav Troshev