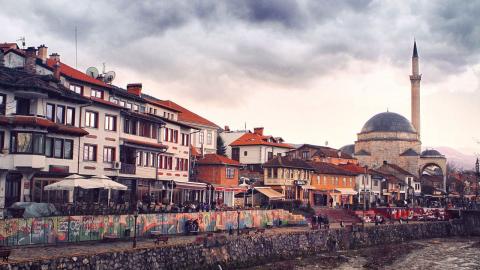 But in the recent past, Prizren has not always been such a problem-free place for Serbs. Out of a pre-war population of around 10,000 Serbs, Jevtic is one of only about 20 who returned after the conflict to live in the city today.

Across the former Yugoslavia, programmes to assist returns for minorities displaced by war have had middling success. The case of Prizren's Serbs demonstrates the hurdles facing these programmes.

In Prizren, even with massive investments and donations for housing from the international community, the cooperation of the local municipality, and a city renowned for its diversity and trilingual culture (Turkish, Albanian and Serbian/Bosnian), Kosovo's failing economy prevents otherwise willing Serbs from returning.

During the 1999 war in Kosovo, the Yugoslav Army and affiliated Serb paramilitary forces violently expelled over 800,000 Kosovo Albanians into neighbouring Albania and Macedonia, and killed more than 10,000. In the immediate aftermath of the war, when Yugoslav forces pulled out, Serb civilians fled Kosovo, fearing retaliatory attacks.

Almost every Serb still in Prizren at the end of the war evacuated in a hastily organised column in June 1999.

Fred Cocozzelli, associate professor of government and politics at St. John's University in New York City, arrived in Prizren that summer to work for an international humanitarian NGO and witnessed what happened next.

Much of Potkaljaja, the old Serb neighbourhood along the hillside in the centre of town, was looted and burned to the ground. In the uncertainty and chaos following the withdrawal of Serbian forces from Kosovo, an overly cautious approach by German troops from NATO's Kosovo force KFOR failed to prevent violence against local Serbs and Roma.<...