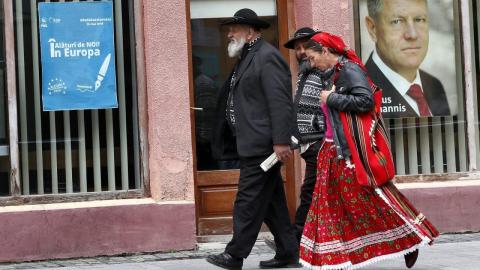 The National Council Against Discrimination, a state watchdog, said on Tuesday that it is investigating Dorin Florea, the mayor of the northern city of Targu Mures, after he called for Roma parents to have their income and education checked before they have a child.

The council is considering whether to launch a case against Florea for discrimination and hate speech after he advocated the measures in a Facebook post.

Florea also told a journalist from the Hotnews website that the measures would spread "fear" across Roma communities in the country.

"Gypsies are a serious problem in Romania and we pretend not to see it," the mayor said in the interview with Hotnews.

He also declared that Roma people "have remained the same" since they were freed from slavery in 1864 by Romanian ruler Alexandru Ioan Cuza.

Florea alleged that Roma parents have children with the "sole aim" of "having a source of income", and criticised the state for "encouraging" them not to work.

"[This] generates increased crime, abandonment [of children], lack of education, etc.," he wrote on Facebook.

Asztalos Csaba, chief of the National Council Against Discrimination, said the mayor's comments could constitute a case of discrimination and hate speech.

"We haven't taken a decision yet as we haven't conducted the necessary hearings," Csaba said.

Verbal attacks on the Roma population are not uncommon in Romania, where politicians and other public figures often claim they are involved in stealing, promoting the prostitution of family members, or child exploitation and trafficking.

Another Romanian mayor, Catalin Chereches of the city of Baia Mare in the far north of the country, made international headlines in 2012 when he forced several...