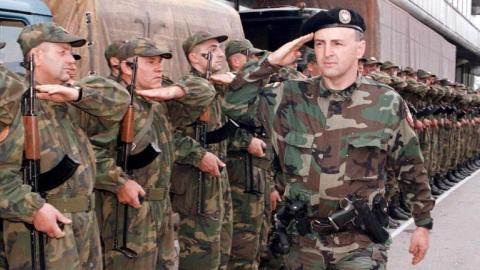 On January 15, 2000, Zeljko Raznatovic was having a drink with friends at the upmarket InterContinental Hotel in Belgrade when a man walked up to them and opened fire at close range with a semi-automatic pistol.

Raznatovic - better known around the world as the Serbian paramilitary leader Arkan - was hit by a bullet in the eye, and died on his way to hospital. He was 47.

A junior police officer called Dobrosav Gavric was convicted of the murder, but he fled Serbia and ended up in South Africa, where he is currently fighting extradition to Belgrade.

Members of Arkan's wartime paramilitary unit, the Serbian Volunteer Guard, better known as the Tigers, committed crimes that allegedly included murder, rape and torture during the conflicts in Bosnia and Croatia. But so far, only one of his fighters, Boban Arsic, has been convicted in absentia in Croatia.

Arkan was charged by the International Criminal Tribunal for the Former Yugoslavia, ICTY before his death, but after he was killed, the case was closed.

Thief in peace, thief in war

Serbian police guard the entrance of InterContinental Hotel in Belgrade following the shooting of Arkan on January 15, 2000. Photo: EPA/SASA STANKOVIC.

In the years before the war, Arkan was a thief who operated both abroad and within Yugoslavia, and was on Interpol's most-wanted list of criminals.

Around the beginning of the Yugoslav conflicts, he became the well-known leader of Red Star Belgrade football club's hardcore fans. He established the Serbian Volunteer Guard in 1990.

The paramilitary unit, which became known as Arkan's Tigers, was a relatively small force made up of fans from Red Star's Delije 'ultras' group, as well as criminals and ordinary volunteers...