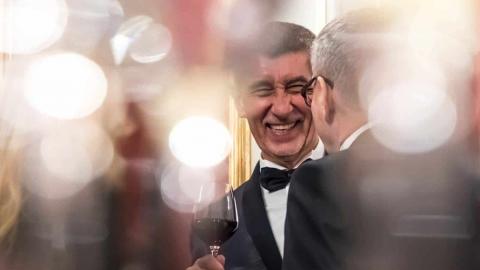 "Imagine me being Harry Potter, having a magic stick and transforming all the planned projects into reality now," he continued. "We would immediately become a second Switzerland."

Of course, Babis was quickly reminded that despite his immense economic and political heft, his powers remain earthbound.

One opposition leader suggested on Twitter that Hogwarts would send him straight to Slytherin —  home to the cunning and evil. And no matter how hard he tries, the premier simply cannot make a raft of corruption scandals disappear.

A man carries a statue of a stork on his head during a protest march against Babis in front of government headquarters building in Prague in mid-December 2019. According to police, 15,000 people took to the streets to demand the resignation of Babis due to alleged conflicts of interest involving the Agrofert conglomerate he founded. Photo: EPA-EFE/MARTIN DIVISEK

Charges of criminal fraud and conflict of interest against the prime minister are set to dominate Czech politics yet again in 2020.

Prosecutors are now re-examining the so-called Stork's Nest case — in which Babis is suspected of fraudulently acquiring EU funds for the construction of a leisure complex in 2007 — after abandoning a four-year investigation late last year.

It is unclear when a decision on whether to press criminal charges will come, but few would be surprised if the can is kicked down the road.

Babis is also due to respond officially to two...

No classified article in Treaty of Lausanne: CİMER

The Controversial Legacy of Dick Marty in Kosovo