An emergency meeting called due to air pollution in Serbia 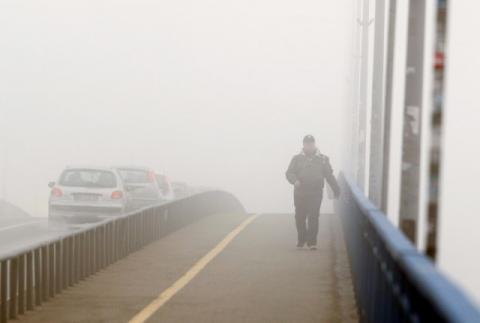 According to Belgrade media, the meeting will be held at 3 pm, with the Ministers of Environment, Health and Energy, Environmental Protection Agency, Republic Hydro-meteorological Institute, representatives of the City of Belgrade, Ministry of Internal Affairs, etc.
In the past few days, the main question that has been engaging the citizens of Serbia is whether it is dense fog that they were surrounded by, or air pollution. According to the media, numerous sites for measuring air quality in Serbia are cited, each of which provides different data.
Thus, according to the Environmental Protection Agency, the air was "heavily polluted" this morning in Belgrade, Valjevo, Kosjeric, Uzice, Nis, Bor, Pancevo, Smederevo, Beocin.
The highest, fifth degree of pollution according to the measurements of the agency was registered at measuring stations New Belgrade and Stari grad, while the fourth category of "pollution" was registered at Mostar bus station. The air is in the "excellent" category at Vracar. On the other hand, data from the Belgrade City Institute for Public Health at 9:00 am indicate that air quality is "acceptable".
That the air in the Serbian capital is bad is also shown by data from waqi.com, which measures pollution globally, and the same applies to Novi Sad, Nis, Valjevo and Kosjeric.
According to this web portal, the air quality in Valjevo and Kosjeric was in the "purple zone" (very unhealthy), while earlier in the morning, the resident of Valjevo inhaled air that was labeled as "dangerous to health".
Serbia's Public Health Institute "Dr Milan Jovanovic Batut" issued recommendations this morning to the citizens pertaining to the air pollution in Serbia's cities. These recommendations specifically apply to morning and...

Editorial: The end of illusions