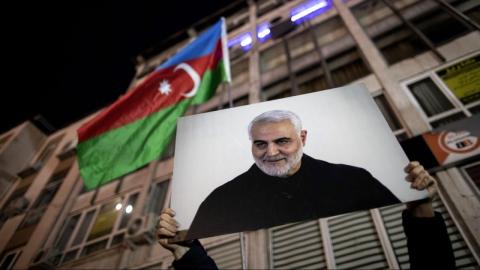 Claims that the late Iranian General Qasem Soleimani planned a terrorist attack in Bosnia and Herzegovina were "baseless allegations" against "the hero of the fight against terrorism and the symbol of victory over Islamic State," the Iranian embassy in Sarajevo stated in a press release.

A resolution submitted to the US Senate by Republican Senator Ted Cruz claims that General Soleimani - killed recently in a US targeted strike in Baghdad - plotted terrorist attacks in Bosnia, Germany, Bulgaria, Kenya, Bahrain, Turkey and other countries, intending to kill Americans and US Army personnel.

But the Iranian embassy called this fake speculation, referring to "tendentious and false foreign sources", and urged the media to stick to the principle of honesty and avoid the publication of unfounded and tendentious information.

General Soleimani oversaw terrorist attacks in Iraq, Afghanistan, and elsewhere that allegedly killed hundreds of United States personnel, the proposed US resolution states, which calls him "the terrorist leader of the Islamic Revolutionary Guard of the elite Quds unit", described as a global terrorist threat to the US and the international community.

In an interview with a Croatian journalist of Libyan origins, Hassan Haidar Diab, in 2017, Soleimani said he had fought on the side of the Muslim Bosniaks in the war in Bosnia and Herzegovina in 1993 and 1994. "Wherever Muslims need help, I am there", he told Haidar Diab.

The head of the Iranian Revolutionary Guards' Quds Force, an elite unit that handles Iran's overseas operations, was killed in a US airstrike at Baghdad airport on January 3, escalating animosities between Tehran and Washington.