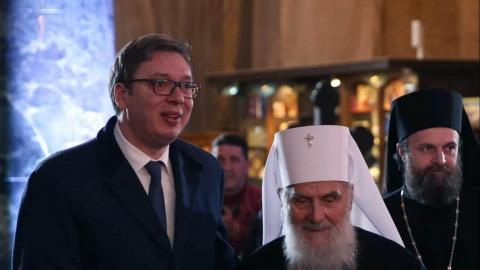 In October last year, at a celebration marking the 800th anniversary of the SPC's autocephaly, or ecclesiastical autonomy, Patriarch Irinej honoured Vucic with the Order of St. Sava 1st Degree, the Church's highest order.

The award was met with criticism by some in Serbia, including 14 bishops who wrote a letter of dissent. Irinej, however, defended the decision, saying Vucic was "fighting like a lion" for Kosovo, the majority-Albanian territory that declared independence from Serbia in 2008 but is not recognised by Belgrade.

Vucic's critics within the SPC

When it comes to the relationship between the current government and the SPC, it is not enough to look only at Irinej and Vucic.

The Holy Assembly of Bishops, which gathers all SPC bishops, includes a number who have spoken out publicly against Vucic's policies.

The critics include the Metropolitan of Montenegro and the Littoral Amfilohije, Bishop Teodosije of Rasko-Prizren, Bishop Grigorije of Dusseldorf and Germany, retired Bishop of Zahum-Herzegovina Atanasije and Bishop Maxim of Western America.

These bishops have publicly opposed a number of decisions taken by Vucic and the award he received from Irinej, accusing the president of compromising Serbia's territorial integrity when it comes to Kosovo.

The controversy came to the fore in May 2019 when Vucic attended a session of The Holy Assembly. It was not his first time, having attended once before when Deputy Prime Minister. Critics see his attendance as unacceptable interference in the...