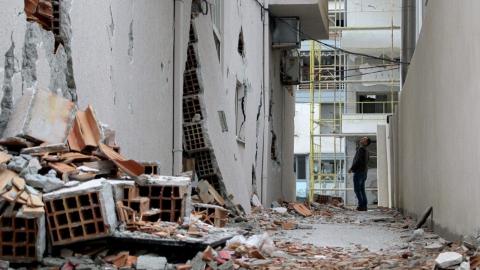 Three independent construction engineers consulted by BIRN, however, advised caution when drawing any definitive conclusions on the reasons why particular buildings collapsed.

Scenes from the Albanian coastal city of Durres after a 6.4 magnitude earthquake. Photo: BIRN/Geri Emiri

Fifty-one people died and more than 900 were injured in the regions of Durres, Kruja, Tirana and Lezha when the earthquake, measuring 6.3 on the Richter scale, struck in the early hours of November 26.

Hundreds of buildings were damaged and declared uninhabitable, leaving thousands of people homeless.

Laboratory tests, in which technicians at the A.L.T.E.A. & Geostudio 2000' lab compressed the concrete used to determine its cubic resistance, showed that half of the 20 samples extracted from the seven razed buildings in Durres were sub-standard.

"As soon as the investigative team started probing the seven collapsed buildings with victims, it collected samples of concrete from these structures in the presence of experts of the Construction Institute for later analysis," a prosecutor involved in the case told BIRN on condition of anonymity.

The results ranged from 7.62 MPa [megapascals being a measure of tensile strength] to 42.08 MPa.

Everything under 20 Mpa, said the prosecutor, "is not construction grade concrete".

Samples from three of the seven buildings subjected to the tests were below 20 MPa. Samples from...