Excavations in Black Sea’s Zeugma to continue all year round 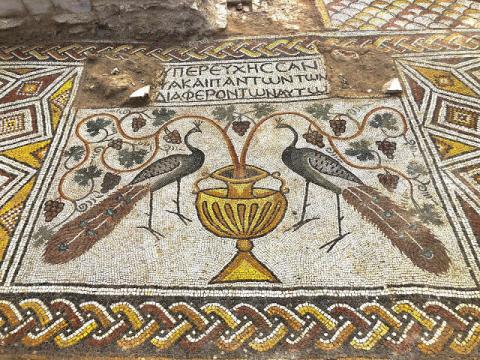 Excavation works in the ancient city of Hadrianapolis, in the Black Sea province of Karabük, will continue throughout 2020, the Karabük governor has said.

Dubbed as the "Zeugma of the Black Sea," excavations in Hadrianapolis will be carried out by a team of 45 people, including experts and students. The excavation team will be headed by Dr. Ersin Çelikbaş, a faculty member in Karabük University's archaeology department.

Gürel added that the ancient city is very extensive thus excavation works take place part by part. In 2019, a team of 30 carried out excavations at Church C and Necropolis areas, in which new mosaics were revealed, he said.

"Findings dating back to 4th-5th century A.D. were unearthed in the Necropolis area. A tomb from 2nd century and an 1,800-year-old votive plaque have been found," he added.

The governor also said that the mosaics revealed last year were put under protection and the areas they were discovered at - Church C and Necropolis- will be opened up even more.

"Other areas of the Hadrianapolis Ancient City have also been detected. Significant findings will be collected from here," he said.

Located three kilometers to the east of Karabük's Eskipazardistrict, Hadrianapolis had settlements in the late Hellenistic, Roman and early Byzantine periods. Archaeological surface surveys have uncovered 14 public buildings and other structures in the ancient city.

Among these public buildings are two baths, two churches, a defense structure, rock tombs, a theater, an arched and domed structure, a monumental cultic niche, walls, a villa, other...