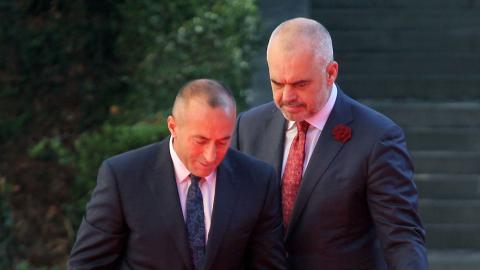 "The suit of the Prime Minister Rama is totally baseless and a political diversion conducted by him to hide himself after new media soap operas, and so avoid responsibilities," Haradinaj wrote.

Rama has in the past filed various defamation claims against domestic political adversaries and TV presenters. This week he went further, filing a lawsuit against Haradinaj at the Basic Court of Prishtina.

The lawsuit, first reported by Betimi Per Drejtesi, a non-for-profit publication, claims Haradinaj repeatedly made "defamatory statements against the claimant's reputation and dignity".

Haradinaj and Rama locked horns several months ago after the Kosovo premier claimed Rama exerted undue pressure on him in relation to Western requests for Kosovo to scrap its custom tariffs on Serbian goods - which Haradina had imposed as a reprisal against Serbia for its diplomatic efforts to block Kosovo's recognition as a sovereign country.

The row escalated in October last year when Haradinaj claimed Rama was plotting with Kosovo's President, Hashim Thaci, and Serbia's President, Aleksandar Vucic, to rearrange the border between Kosovo and Serbia as part of a "final deal" between Belgrade and its former province.

According to Rama, "this issue dominated the public debate … and brought charges of 'treason' against people who it was claimed supported the idea of the so-called 'exchanges of territories between Kosovo and Serbia'."

Rama has demanded an apology from Haradinaj and financial compensation, although it is not clear what amount he seeks. His office did not answer a BIRN request for clarification by the...