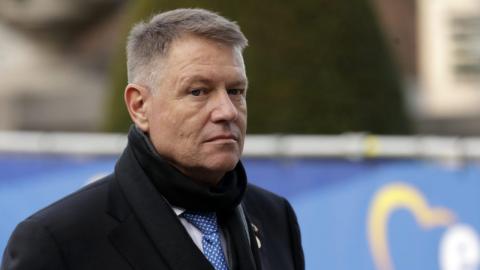 Romania's President Klaus Iohannis on Thursday announced that Bucharest will partially revoke cooperation projects committed to Moldova, as his office is "not convinced" that the current government in Chisinau is on what he called "the European track".

"The European track of the Republic of Moldova is the only and the safest path towards a deep and thorough reformation of its institutions," Iohannis said in his annual address to the diplomatic corp in Bucharest.

"Unfortunately … we are not convinced that the current government in Chisinau is pursuing this objective. Therefore, we shall seek to ensure continuation only to those projects that directly target the citizens of the Republic of Moldova - to projects that can make an impact on a local level and to the projects envisaged as ensuring a strategic inter-connectivity," Iohannis declared.

The President did not specify which projects would be scrapped or interrupted.

"We shall resume our full-fledged cooperation only when the government in Chisinau takes concrete action geared towards continuing … Moldova's European path, its reform process, especially in fields such as justice, administration and fighting corruption," Iohannis added.

A decade after Moldova took the European path, the former Soviet republic now appears to be taking a path in the opposite direction.

Moldova embarked on a reformist road when a coalition between the pro-Western ACUM bloc and the pro-Russian Socialists took power, displacing the previous government led by the Democratic Party of the now fugitive oligarch Vladimir Plahotniuc.

ACUM's Maia Sandu was elected Prime Minister and visited Iohannis only days after taking office, receiving the full support of the Romanian President in her drive to...

A Strong Earthquake Hit Eastern Romania, it was also felt in Bulgaria