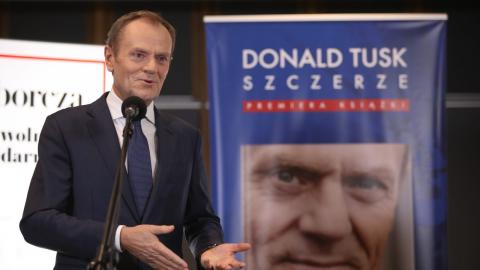 Tusk himself ups the ante in the introduction to the book, published (in Polish) at the end of last year by media giant Agora.

"When I told Herman Van Rompuy, the former prime minister of Belgium and my predecessor, that I am sending my notes from the last years to a publisher, he scratched his head: 'Why are you doing that? It's very risky, you will regret it.'"

Tusk writes: "The history of the last five years — in Poland and the EU — is constantly lied about. I don't know who in 50 years will be interested in its truer version. But one thing I know for sure: it will be too late then to make up for the losses and repair the damage which daily lies are causing here and now."

The premise of Tusk's book, then, is to tell his truth about a scintillating chapter in EU history, thus counteracting fake news peddled by illiberals within the bloc and enemies outside it.

That expectation is boosted by Tusk's public persona. He is known for a style of communication that is direct, sharp and humorous.

"There's a special place in hell" for "those who promoted Brexit without even a sketch of a plan of how to carry it out safely", he famously quipped in February 2019.

But the book brings neither revelatory directness nor deep insight, which many will find disappointing since Tusk is capable of both. Readers will not learn much more about all those crises facing Europe than they will have gleaned from the news at the time.

Bar a few not-so-relevant anecdotes (US President Barack Obama's nonchalant gum-chewing during a high-level summit, say), we get little texture on the world leaders Tusk interacted with. Nor do we receive real background on why EU leaders made the major decisions they did.

Tusk, for example, prides himself on...