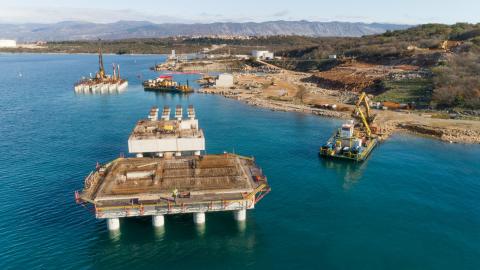 Ahmetovic, 38, does not mince words. She organises her thoughts methodically, like the papers filed in a thick, red binder on the desk in front of her: letters of complaint penned to ministers and state institutions, most of which went unanswered.

"As long as I'm the mayor of Omisalj […] I'll look for every legal way to close down this project," Ahmetović told BIRN. "This is my job, my duty and my pleasure. I'll write to the president of the world if I need to."

The project she is set against is a floating terminal for liquid natural gas (LNG), to be built on the northwestern tip of Krk, Croatia's largest island and a top tourist destination.

Deemed a "project of strategic interest", it involves mooring a 280-metre-long repurposed oil tanker in full sight of the ruins of the ancient Roman town of Fulfinum, just off Omisalj. The view overlooks the sparkling Bay of Rijeka in the northern Adriatic.

The seaside town of Omisalj in the northern Adriatic. Photo: BIRN

With a price tag of 234 million euros, the terminal will allow vessels ladened with LNG to offload their liquid cargo for on-site conversion to ordinary gas, which can then be distributed via Croatian pipelines.

At full capacity, it could process 2.6 billion cubic metres (bcm) of gas per year — equivalent to almost 80 per cent of Croatia's annual gas consumption. It is due to be up and running by 2021.

The initiative has received substantial EU funding as one of the bloc's Projects of Common Interest, key cross-border infrastructure projects that link the energy systems of member states.

The government says it is "important for Croatia's energy independence and security" because it will help diversify gas supply — a polite way of saying...