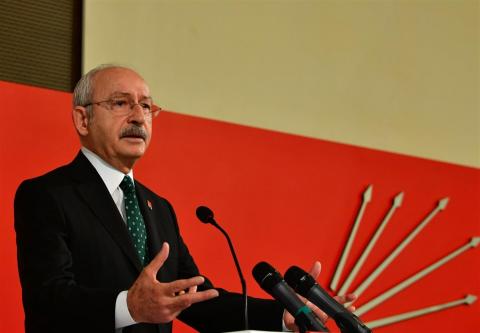 "If an international conference were to be held, why didn't you do it? Why are you following hegemon powers and put Turkey under their gravitational field," Kemal Kılıçdaroğlu said, referring to the to-be-held Berlin summit on Libya.

The CHP leader's remarks came after a speech at the party's meeting.

Kılıçdaroğlu also recalled his previous call on a United Nations involvement in the peace process in Libya.

"We said 'We have an effect on Libya, we never forgot how they helped us during [Muammar] Gaddafi's period.' They said 'We can't to this. We will meet with the legitimate U.N.-recognized government'," he said.

"Now what happened? [Russian President Vladimir] Putin came, and they sat at the same table with Haftar. Putin is directing Turkey's foreign policy," he said.

Libya's warring leaders made some progress at indirect peace talks in Moscow on Jan. 13 but failed to agree on an open-ended ceasefire to end a nine-month war over the capital Tripoli.

Haftar left Moscow without signing a ceasefire agreement drafted at the Moscow talks and asked for two days to discuss the truce, Russia's defense ministry said on Jan. 14.

Meanwhile, Germany on Jan. 14 said it will host a conference on Jan. 19 in Berlin to support the United Nations' effort to achieve peace and reconciliation in Libya after months of violence.

Representatives from the United States, Russia, Britain, France, China, Turkey, Italy and the U.N. will be among the participants, said the German government in a statement.