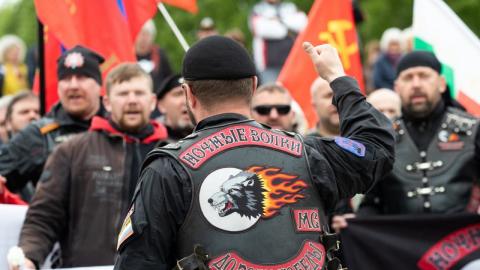 The head of the pro-Kremlin Russian bikers group, the Night Wolves, has lent strong support to pro-Serbian protesters in Montenegro in a video published on Facebook on Friday.

"We won't give up the holy places," Alexandar Zaldastanov, alias the Surgeon, said on the video, referring to a slogan used widely during the mass protests in Montenegro against a new law on religion that critics say targets the assets of the Serbian Orthodox Church.

Zaldastanov, participating at Orthodox New Year celebrations in Russia, was shown standing next to a man whose T-shirt bore a message in Russian reading: "Orthodox brothers, Serbia" above a Serbian emblem.

He also declared his support for Serbs and Serbia in general. "The new year Christmas tree in the bike centre is being visited by our many Serbian friends for a second day in a row, leaving us with enthusiastic feelings … Russia is not a nation but a state of mind!, my Serbian friends have told me," Zaldastanov wrote.

The biker club, well known for its links to Russian leader Vladimir Putin, has become present in several Balkan countries where it has set up local branches.

In Bosnia and Herzegovina, it enjoys close ties to the Bosnian Serb leader, Milorad Dodik. In Serbia, the club has also helped to organise a number of of events together with the authorities. In 2018, the Night Wolves organized a tour of Bosnia and Serbia under the slogan "Russian Balkans".

Its presence in Montenegro is far more controversial, given the pro-Western outlook of the government. In October 2018, Montenegrin police briefly held four members of the club who were accompanying the Serbian Orthodox Church Patriarch, Irinej, on his visit to the country.