Trump's trial begins at the start of an election year 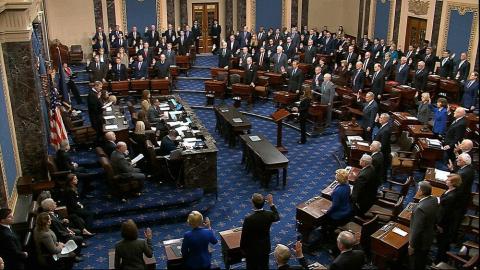 The U.S. Senate opened the impeachment trial of President Donald Trump with quiet ceremony on Jan. 16 senators standing at their desks to swear an oath of "impartial justice'' as jurors, House prosecutors formally reciting the charges and Chief Justice John Roberts presiding.

The trial, only the third such undertaking in American history, is unfolding at the start of the election year, a time of deep political division in the nation. Four of the senators sitting in judgment on Trump are running for the Democratic Party's nomination to challenge him in the fall.

Senators filled the chamber, an unusual sight in itself, sitting silently under strict rules that prohibit talking or cellphones, for a trial that will test not only Trump's presidency but also the nation's three branches of power and its system of checks and balances.

The Constitution mandates the chief justice serve as the presiding officer, and Roberts made the short trip across the street from the Supreme Court to the Capitol. He has long insisted judges are not politicians and is expected to serve as a referee for the proceedings. Senators rose quickly when he appeared in his plain black robe.

"Will all senators now stand, and remain standing, and raise their right hand," Roberts said.

"Do you solemnly swear that in all things appertaining to the trial of the impeachment of Donald John Trump, president of the United States, now pending, you will do impartial justice according to the Constitution and laws, so help you God?''

The senators responded they would, and then they lined up to sign an oath book.