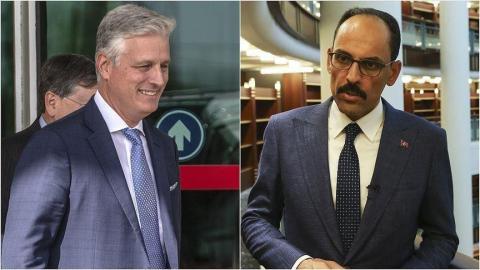 İbrahim Kalın and Robert C. O'Brien also exchanged views on an international conference that will be held on Jan. 19 in Berlin on the Libyan crisis and highlighted the importance of maintaining the ceasefire and agreement on the de-escalation zone in Idlib, Syria, said the sources, who asked not to be named due to restrictions on speaking to the media.

Germany is inviting countries concerned with the Libyan issue to attend the Berlin conference in an attempt to reach a political solution to the conflict.

Kalın and O'Brien also agreed on making the necessary suggestions to the relevant parties for the implementation of the ceasefire in Libya.

On Jan. 12, the warring sides in the Libyan conflict announced a ceasefire in response to a call by Turkish President Recep Tayyip Erdogan and Russian President Vladimir Putin.

Since the ouster of late ruler Muammar Gaddafi in 2011, two seats of power have emerged in Libya: one in eastern Libya supported mainly by Egypt and the United Arab Emirates and the other in Tripoli, which enjoys U.N. and international recognition.

Turkey and Russia also agreed in September 2018 to turn Idlib into a de-escalation zone where acts of aggression are expressly prohibited.

The Syrian regime and its allies, however, have consistently broken the terms of the ceasefire, launching frequent attacks inside the zone, killing at least 1,300 civilians since the agreement.

The de-escalation zone is currently home to some four million civilians, including hundreds of thousands displaced in recent years by regime forces...