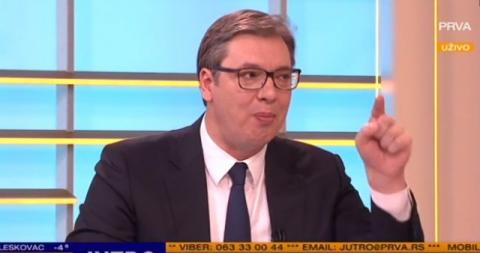 He made a guest appearance on TV Prva in the Morning program and added that he could not change anything because everyone would accuse him of interfering with the independence of the judiciary.
Vucic said that he, as president, has no opportunity to change things, because there is a permanent judicial office and "nobody can touch them" when it comes to that, otherwise he would receive criticism from both within the country and the European Union.
"There is a man who claims that another man paid him and ordered him to kill a man, but they do not want to take him as a protected witness", Vucic said, reiterating that there is Filip Korac who organizes the sale of drugs to children in schools in Serbia and that the Serbian judiciary suspended the proceedings against him.
According to him, even when the police obtain sufficient evidence and pass it on to the prosecution and the court, they always find some procedural obstacles in the judiciary. "But I cannot change the judge, the prosecutor or the police officer because they will say that I influence the judiciary. They have a permanent judicial office and nobody can touch them", he said.
According to him, in other countries, such as France, the executive authority elects prosecutors and judges, and the they fall under president's jurisdiction and he is responsible for their work, but the international communities and the domestic public would not allow such a thing to apply in Serbia.
"I told French President, at midnight at the Champs-Elysees, 'Listen, you Emanuel... You would anyhow be in no position to open chapters 23 and 24 now'," Vucic said.

Speaking about the Jovanjica affair, Vucic stated that the case is being forced into an affair all the time, based on...