"Yes, there is a panic over air pollution", Vucic said, sending a message to Trivan 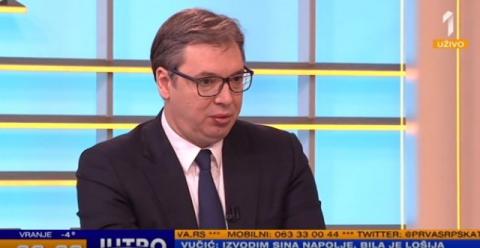 "It is a real problem, but also a part of campaign", Aleksandar Vucic said, adding that it is sometimes grotesque, citing the live coverage of journalists who intentionally cough while reporting on air pollution.
"There is a problem, a real one, that has been neglected for decades. There is also a problem in Milan, because yesterday we had the same number of particles, and Milan is one of the most developed cities", he said, adding that he did not want justification but solutions.
Asked if he was taking his child outside, Vucic said that his three children live in the most polluted part of Serbia and Belgrade, which is New Belgrade. "Yes, I take the baby outside, as my parents took me out, too", Serbian President said.
There is no room for panic, Vucic points out.
Recalling that air has been polluted in Serbia for days without any of the responsible officials announcing themselves about it, starting with the Prime Minister, Minister Trivan, Deputy Mayor of Belgrade, who did not respond to calls for a guest appearance to explain to the citizens what was happening, Vucic points out "that, first of all, he asked Prime Minister Ana Brnabic if the man was alive, to say something should be done because he saw that people began panicking".
Still, he points out that there is no room to panic. "I served in the army in Sarajevo municipality of Lukavica and there was lots of fog back then", Serbian President said.
Asked if he was now feeling the pollution when he breathed in, he said he was not feeling anything: "If I felt something, I would have no problem telling you. Fog has always been here, I've worked in London and it has always been covered with fog. Ours is to address the problem and see what to do," he said.
Asked to comment...