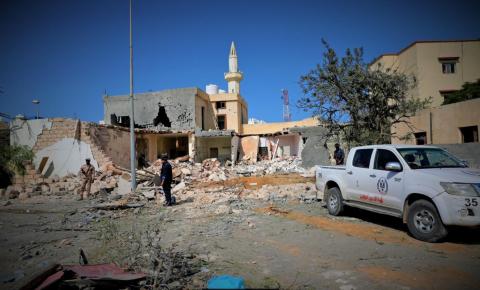 Turkish President Recep Tayyip Erdoğan has called on Europe to support its work in Libya, where it is providing military support to the internationally-recognized government, if it wants to end the conflict there.

Erdoğan made his remarks in a column published on the Politico website on Jan. 18, ahead of a summit in Berlin on Jan. 19 that will try to stabilize the country.

At the meeting, Germany and the United Nations will push rival Libyan camps fighting over the capital, Tripoli, to agree to a truce and monitoring mechanism as first steps toward peace, diplomats and a draft communique said.

Turkey supports the government of Fayez al-Serraj in Tripoli and describes Khalifa Haftar, who heads the eastern Libyan National Army (LNA), as a coup plotter.

"EU's potential failure to adequately support Libya's Government of National Accord (GNA) would be a betrayal of its own core values, including democracy and human rights," Erdoğan said.

"Moreover, Europe will encounter a fresh set of problems and threats if Libya's legitimate government were to fall," he added.

Erdoğan also said "obvious choice for Europe is to work with Turkey" as it is not much interested in providing military support to Libya.

"Keeping in mind that Europe is less interested in providing military support to Libya, the obvious choice is to work with Turkey, which has already promised military assistance," Erdoğan wrote.

"We will train Libya's security forces and help them combat terrorism, human trafficking and other serious threats against international security," he added.

Germany is set to host a major peace conference on Libya that will seek a stronger commitment from regional actors for a cease-fire in the war-torn country to pave...

Slovenia make it to semi-finals of Olympic basketball tournament