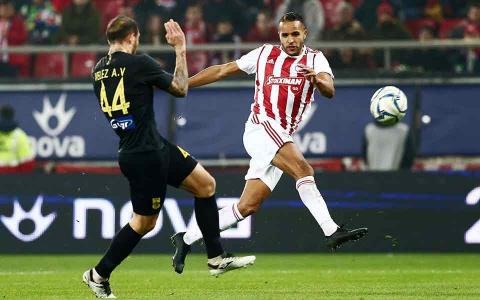 Olympiakos and PAOK scored comfortable home wins as they have turned the Super League into a two-horse race. Panathinaikos has climbed to fourth.

The Reds remained one point above PAOK thanks to a 4-2 home victory over the other Thessaloniki club, Aris, in a very entertaining game at the Georgios Karaiskakis Stadium. Top scorer Youssef El-Arabi was on the score sheet for Olympiakos, alongside Guilherme, Omar Elabellaoui and Mathieu Valbuena. Lindsay Rose and Nicolas Diguiny scored for Aris. This was the sixth goal for El-Arabi in the last seven games.

PAOK defeated Asteras Tripolis 3-1 without having to work particularly hard. Karol Swiderski, Dimitris Pelkas and Lazaros Lambrou were on target for PAOK, before Mark Fernandez pulled one back for the visitors.

AEK also had a decent enough game, to beat Larissa 3-0 in Athens courtesy of goals by three Portuguese...