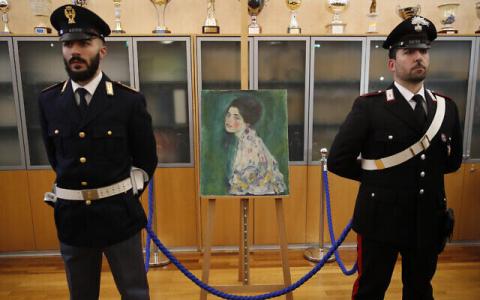 A painting found stashed inside a wall at an Italian museum has been confirmed as the stolen "Portrait of a Lady" by Austria's Gustav Klimt, prosecutors said on Jan. 17, two decades after the artwork went missing.

The century-old painting was discovered concealed in an external wall by gardeners at the Ricci Oddi Gallery of Modern Art in Piacenza, northeast Italy, last month.

The museum estimates that the 55-by-65-centimeter expressionist work could be worth between 60 and 100 million euros, but notes the difficulty in estimating the work as it has never been sold on the market."

It is with no small emotion that I can tell you the work is authentic," prosecutor Ornella Chicca told reporters. Museum officials had initially said they could not immediately determine whether the painting was indeed the stolen Klimt until scientific tests were undertaken.

Painted in 1916-1917, the expressionist work depicts the face and torso of a young woman with brown hair, over an emerald green background.

The painting went missing in February 1997 while the museum was closed for work. In December, gardeners removing ivy from a wall found a small ventilation space and discovered the painting inside, without a frame and wrapped in a black garbage bag. The ivy covering the space had not been cut back for almost a decade.

Chicca said further tests would determine whether the painting had been lingering inside the wall space since it was stolen, or whether it had been hidden there at a later date."At the moment, we can't say whether it has been there all along," the prosecutor said. Once those tests were completed, the painting will hopefully be returned to the gallery's walls, she said.

Ursula von der Leyen: It's Time to think about Mandatory Vaccination in the EU