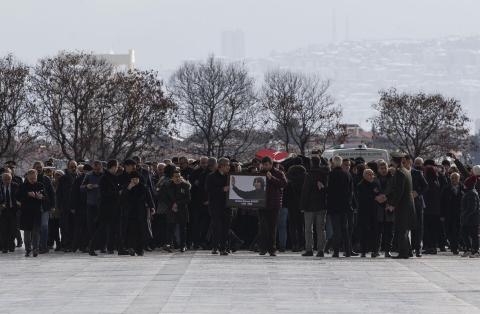 Rahşan Ecevit, wife and closest confidant of late Turkish Prime Minister Bülent Ecevit, was laid to rest in the capital province of Ankara on Jan. 19.

Ecevit died at the Gülhane Training and Research Hospital, where she had been receiving treatment since Dec. 26, on Jan. 17 at the age of 97.

She died in the intensive care unit due to multiple organ failure at around 9.10 p.m.

She was the daughter of parents who moved from Thessaloniki, Greece to Turkey's Black Sea province of Giresun. She graduated from Istanbul's prestigious Robert College where he met her late husband and married in 1946.

The love of the Ecevits was spoken as much as their political life.

Also a poet, she wrote a poem titled, "We've grown this love together," in which she explained her love to the former prime minister.
Ecevit told of her marriage in a book by Kadir Çeli titled "Rahşan Ecevit tells: A life with my Bülent."

"Yes, we were happy. [...] We had many troubled days, difficult days politically," she said

When it comes to our rallies, we have gone through great dangers. Guns were turned over us, stones were thrown, sticks were used, etc., but we were always happy."

Ecevit, along with former lawmaker and minister Emrehan Halıcı, founded Bülent Ecevit Foundation after the passing of her husband.
In 2002, she wrote a novel, "Love in Pülümür, which was later adapted to the theater.

Ecevit founded the DSP in 1985 and became its leader. Bülent Ecevit who was banned from politics during that time explained the party's founding.

"We had an intense struggle for...