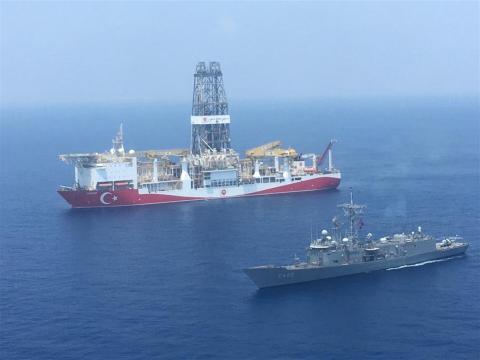 Turkey announced on Jan. 19 that it has dispatched its drillship, Yavuz, to conduct hydrocarbon exploration works in the block "G" licensed by Turkish Cypriot in the south of the island.

"Our drillship, Yavuz, was relocated on [Jan. 17] to the Block G in the south of the island in order to conduct its third drilling activity as part of the licenses given to Turkish Petroleum in 2011 by the TRNC [Turkish Republic of Northern Cyprus] government," read a written statement issued on Jan. 19 by Hami Aksoy, the spokesman of the Turkish Foreign Ministry.

Turkey's statement followed a reaction by the European Commission about Ankara's announcement of the dispatch of Yavuz which has re-claimed that this work is illegal.

"Concrete steps towards creating an environment conducive to dialogue in good faith are needed. The intention by Turkey to launch further exploration and drilling activities in the wider region goes, regrettably, in the opposite direction," the commission said.

Turkey reiterated that the Turkish Cypriots have rights over the hydrocarbon reserves in this particular block as much as the Greek Cypriots have and informed that oil and natural gas revenues will be shared in the case the reserves are found. It also recalled that the Turkish Cypriot authorities have proposed a mechanism to the Greek Cyprus to share the revenues from the hydrocarbon resources.

Calling on the EU to end this policy based on prejudices and far from being realistic,...

Thousands march in Berlin in support of refugees in Greece