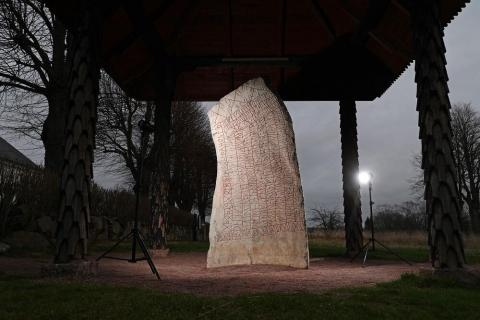 One of the world's most famous runestones is now believed to have been erected by Vikings fearing a repeat of a previous cold climate crisis in Scandinavia, according to a new study.

The Rok stone, located near Lake Vattern in central Sweden, carries what is believed to be the longest known runic inscription in the world. It consists of more than 700 runes, the letters of old Germanic language alphabets.

It is believed to have been erected as a memorial to a dead son, but the exact meaning of the text has remained elusive, as parts are missing and it contains different writing forms.

The stone refers to the heroic acts of "Theodoric," which some scholars believe refers to Theodoric the Great, a sixth century ruler of the Ostrogoths in what is now Italy.

Researchers have long thought the 5-ton, roughly 2.5-meter (8-feet) tall Rok stone was raised as a memorial to a dead son and the writing on it related heroic tales of Viking kings and the battles they fought.

Four academics at three Swedish universities now suspect the inscriptions are more of an allusion to an impending period of extreme winter, as the person who erected the stone tried to put their child's death into a larger perspective.

"The inscription deals with an anxiety triggered by a son's death and the fear of a new climate crisis similar to the catastrophic one after 536 CE," the authors wrote.

The sixth-century crisis is believed to have been caused by a series of volcanic eruptions which dramatically influenced climate with lower average temperatures, ruined crops and ensuing hunger and mass extinctions.

"We believe it talks about a cosmic balance," University of Goteburg Professor Per Holmberg, who led the study, said.