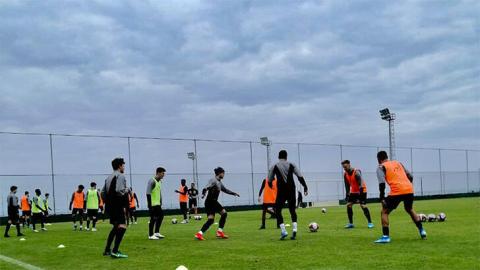 Turkish Cyprus is hosting a FIFA and UEFA member country's football team for winter camp for the first time in decades.

Vålerenga, which competed in Norway's top football league, came for a mid-season training at the facilities of a hotel in the Turkish Cypriot resort town of Kyrenia.

"We were able to bring school teams to our country before, but for the first time an important team chose our country for the camp. This is a big event," said Fikret Yeterli, an official from Acapulco Sports Park Hotel where Våleranga camped.

The mid-season training of Våleranga will last for a week, but there is no friendly match in the team's schedule.
Turkish Cyprus is only recognized by Turkey and is facing a longstanding embargo in commerce, transportation, culture and sports.

The embargo on Turkish Cypriot sports started with the declaration of Turkish Cyprus in 1983.

Applying to FIFA to play a friendly match with Turkish Cyprus' national football team, Turkey was forced to withdraw its application due FIFA's imminent punishment against Turkey's Football Federation (TFF).

However, Turkish Cyprus, which did not lose its hope of having external contacts, applied to FIFA in July 1987 to play international matches.

The chance of Turkish Cypriot football teams to play friendly matches in the international arena ended with this decision.