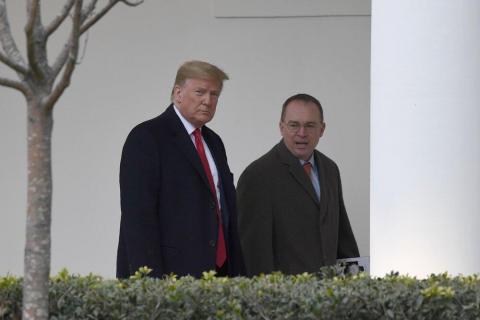 President Donald Trump's defense team and the prosecutors of his impeachment are laying out their arguments over whether his conduct toward Ukraine warrants his removal from office.

Trump's lawyers on Jan. 19 previewed their impeachment defense with the questionable assertion that the charges against him are invalid, adopting a position rejected by Democrats as "nonsense."

The trial resumes on Jan. 21 with what could be a fight over the ground rules. By then, both sides will have submitted briefs and four Democratic presidential candidates will have been forced back to Washington from the early nominating states to join every other senator in silence, sans phones, on the Senate floor.

What they're likely to hear in this extraordinary setting is the House Democrats' impeachment articles that charge Trump with abuse of power and obstruction of Congress over his pressure on Ukraine for political help. From the White House, the senator-jurors are expected to hear that Trump committed no crime, the impeachment articles are invalid and he's the victim of Democrats who want to overturn his election.

"Criminal-like conduct is required," said Alan Dershowitz, a constitutional lawyer on Trump's defense team. Dershowitz said he will be making the same argument to the Senate and if it prevails, there will be "no need" to pursue the witness testimony or documents that Democrats are demanding.

But the "no crime, no impeachment" approach has been roundly dismissed by scholars and Democrats, who were fresh off a trial brief that called Trump's behavior the "worst nightmare" of the country's founders. In their view, the standard of "high crimes and misdemeanors" is vague and open-ended in the Constitution and meant to encompass abuses of power...