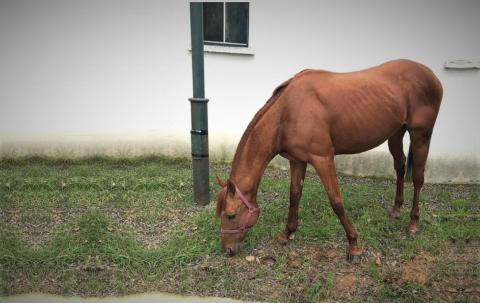 A racehorse belonging to Reza Zarrab, a Turkish-Iranian businessman who was arrested in the U.S. in 2016 over evading sanctions on Iran, had to leave his champion-style life in a hippodrome to live a more modest life on a simple ranch on the outskirts of Istanbul.

The horse named "Dayım Benim," a male English thoroughbred, was owned by Zarrab, or Rıza Sarraf, until his arrest in the U.S over Iran sanctions evasion. He later became a top witness in a trial against former Halkbank deputy general manager Mehmet Hakan Atilla after striking a deal with the U.S. prosecution. Several charges were filed against him in Turkey in the aftermaths of the trial in the U.S.

In the meantime, the prosecutor's office in Istanbul on Dec. 1, 2017 decided to freeze Zarrab's assets including former champion racehorse Dayım Benim, which means "My Uncle."

The horse was allowed to compete in five races in 2018, winning between 2nd and 6th ranks and earning more than 100,000 Turkish Liras ($16,870) in total. The money was transferred to Zarrab's frozen account.

However, Zarrab's ownership certificate was then revoked by the Jockey Club of Turkey (TJK), putting Dayım Benim in limbo.

"I have been covering his expenses for four years. The costs total around 4,000 Turkish Liras [nearly $657] monthly," said trainer Tahir Kurt, who also claimed that he could not get any payments from the Zarrab family after several contacts with them and their legal representatives.

"I couldn't abandon him, because I love him. He is seven years old now, thus he can compete in a race for a further...