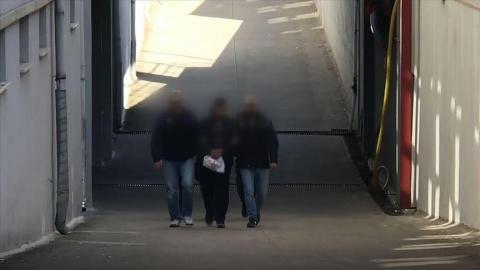 The suspects were arrested in Istanbul and the southern Adana province, while another of Syrian nationality was held in the southern Hatay province, Anadolu Agency cited anonymous sources, who asked not to be named due to restrictions on speaking to the media.

Acting on a tip-off received earlier this month, Adana police detained another suspect in a cargo office, while allegedly trying to send drones to people with links to terrorist groups in Syria.

Prosecutors in Adana issued arrest warrants for three other people over alleged links to terrorist groups.

Although the statement did not mention any specific terrorist group, Turkish forces have long been conducting operations against the terrorist group YPG/PKK in the region.

The U.S.-backed SDF, a group dominated by the YPG, has been controlling some 28 percent of the Syrian territories, including the most of the 911-kilometer-long Syria-Turkey border.

Turkey deems the YPG the Syrian offshoot of the illegal PKK, which is listed as a terrorist organization also by the United States and the EU.

Meanwhile, at least seven people were detained in Turkey for their alleged links to the ISIL terror group, security sources said on Jan. 21.

Security forces in Turkey's northwestern province of Kocaeli were investigating the...

Another Earthquake in Turkey