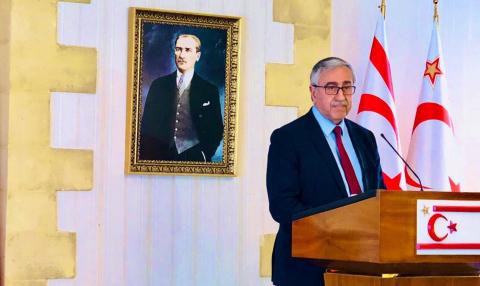 Turkish Cypriot leader on Jan. 21 said diplomatic methods should be used extensively in a bid to counter growing tensions in the Eastern Mediterranean.

Mustafa Akıncı's remarks came at the International Science Diplomacy Forum held in the capital Lefkoşa where he commented on the discovery of natural gas in the region and diplomatic ties with neighbors.

Akıncı said the region was at crossroads with regard to the natural gas issue and Greek Cypriots had two alternatives, either maintaining diplomacy of tension or move towards cooperation in the light of the scientific developments.

Referring to the agreement Greek Cypriots, Israel and Greece reached on the EastMed project early January, Akıncı said the project was not based on any concrete scientific reality and said diplomatic efforts in the region should be initiated in a bid to resolve dispute.

Many academics from the Turkish Cyprus and their international counterparts were present at the forum.

The 2,000-kilometer (1,200-mile) pipeline will be able to transfer between nine and 12 billion cubic meters a year from offshore gas reserves between Israel and Greek Cyprus to Greece, and then on to Italy and other southeastern European countries.

Turkey argues that the Greek Cypriot government should not have started gas explorations before reaching a settlement in reunification talks with the Turkish Cypriots, and that the mineral wealth belonged to both communities.
It is estimated that the transfer cost of the natural gas would be three times cheaper if the pipeline passes through Turkey.

In 1974, following a coup aiming at Cyprus' annexation by Greece, Ankara had to intervene as a guarantor power. In 1983, Turkish Cyprus was founded.<...