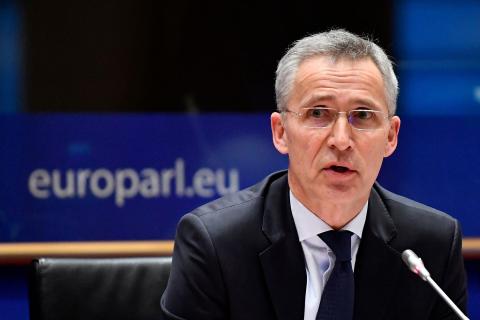 NATO chief Jens Stoltenberg said on Jan. 21 Turkey is crucial in the fight against ISIL.

"No ally has suffered more terrorist attacks than Turkey. They are important in the fight against Daesh. They are the only ally which is bordering Syria and Iraq," he said, using the Arabic acronym for ISIL.

Stoltenberg's remarks came during a speech at the European Parliament in Brussels.

He added that the progress and achievements NATO has made in that fight would not be possible without using Turkish bases and infrastructure.

Stoltenberg said NATO is also extending support to Operation Sophia in the Mediterranean to crack down on refugee smuggling routes.

"Actually we could do more to provide support if that is requested or called for by the EU, for instance, to help implement the arms embargo against Libya," he said.

Stoltenberg reiterated the importance of the transatlantic bond between Europe and North America.

Stoltenberg said this bond is symbolized by NATO itself.

Stoltenberg also said that the alliance must beef up its military training operation in Iraq to ensure that its members are not drawn back into combat there against ISIL extremists.

Stoltenberg has held talks in recent days with senior Iraqi and officials and King Abdullah of neighboring Jordan amid cautious optimism that NATO might be permitted to resume its training activities in Iraq in the near future.

"We need to go heavy in and train. Build everything from the ministry of defense...

Istanbul airplane may have crashed ‘due to hydroplaning’