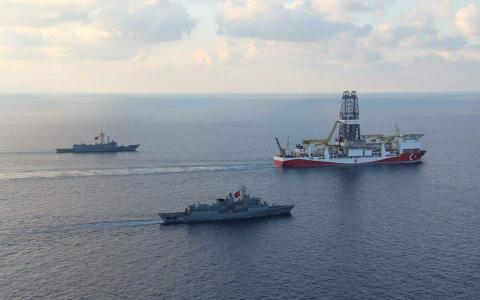 The government of the Republic of Cyprus believes Turkey has obtained privileged drilling information regarding an area off the southern coast of the island.
Cypriot government spokesperson Kyriacos Koushos, who spoke to Greece's state broadcaster ERT on Tuesday, charged Ankara with having "somehow" obtained information regarding Block 8, which lies north of Egypt's Zohr and Israel's Leviathan gas fields.
Previous studies were conducted by energy firms ENI and TOTAL, after the Italian and French companies obtained exploratory licences from the Republic of Cyprus.
"It appears that they got the information collected in the studies," Koushos said, while clarifying he did not believe the data were shared by the licenced companies.
"I want to make it absolutely clear that there is no insinuation whatsoever that the companies were in any way involved," Koushos said....

They told us what we were telling them

Triumph for Olympiakos at PAOK

New plan for reduction of corporate tax deposit to 70 pct

The end is nigh for ‘tekmiria’