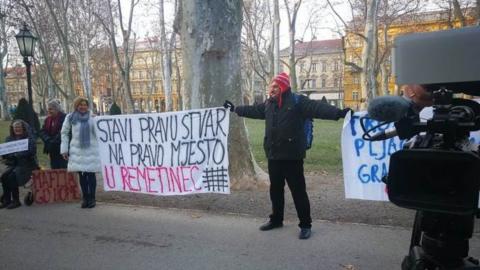 Citizens of Zagreb dissatisfied with the two-decade-long rule of their mayor, Milan Bandic, protested on Wednesday in front of the County Court during a hearing against him.

As Bandic walked into the court, they whistled and shouted: "He is guilty!" They also held up banners with messages such as, "Mafia go home". Some protesters sat in the courtroom.

One made a prison package for the mayor, comprising a toothbrush, toilet paper, soap and a towel, clearly assuming his guilt of the charges.

Bandic and his co-defendants are on trial in a case codenamed Agram suspected of embezzling at least 3 million euros and damaging the city and state budgets. They are accused of corruption, abuse of office and interest peddling.

Croatia's anti-graft body, USKOK, first launched an indictment in December 2015 but some of the charges were later revised and the proceedings suspended.

The trial has now formally restarted after charges of misuse of the waste management service were appended to the existing indictment last October.

Bandic pleaded not guilty on Wednesday and did not appear before reporters after the hearing. It is presumed that he left the building via the back door.

Besides corruption, Bandic has often been accused of a lack of transparency, and of running reckless projects in the capital, where he has erected various fountains and monuments. At the same time, infrastructure problems have multiplied in the city, such as the inadequate waste management service.

The mayor was one of the main topics in the presidential election that ended on January 5 with the victory of the centre-left candidate Zoran Milanovic.

Bandic backed his conservative rival, Kolinda Grabar-Kitarovic, who was running for re-election. What...