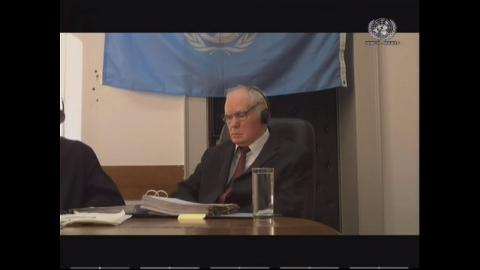 Petar Djukic, a former high-ranking Serb police officer in Croatia and Bosnia and Herzegovina, told the retrial of Jovica Stanisic and Franko Simatovic at the Mechanism for International Criminal Tribunals in The Hague on Tuesday and Wednesday that military volunteers who came to Bosanski Samac in Bosnia in April 1992 were brought by political parties and not by Serbian State Security, SDB.

Djukic, who started testifying in mid-December and continued this week after the New Year break, was asked about crimes committed in the Bosanski Samac area in the spring of 1992, for which Stanisic and Simatovic are accused of being responsible.

Djukic said he had heard of the crimes and knew that some people have already been convicted of them, but insisted that he did not know "who killed who".

Stanisic, the former head of the SDB, and Simatovic, his deputy and former commander of the SDB's Special Operations Unit, are charged with participating in a joint criminal enterprise led by Serbian President Slobodan Milosevic to cleanse Croats and Bosniaks from swathes of Croatia and Bosnia to create an ethnically pure Serb state.

The indictment accuses them of organising the formation of special state security units and other forces to fight in Croatia and Bosnia between 1991 and 1995.

According to the indictment, around April 11, 1992, Serb forces, "particularly special units of the Republic of Serbia DB", come to Bosanski Samac from Serbia.

Six days later they attacked and took control over the town.

The indictments says that the leaders of the Serbia DB units were Dragan 'Crni' Djordjevic, Srecko 'Debeli' Radovanovic and Slobodan 'Lugar' Miljkovic.

At an earlier hearing in mid-December, Djukic said that 'Crni' Djordjevic told him...