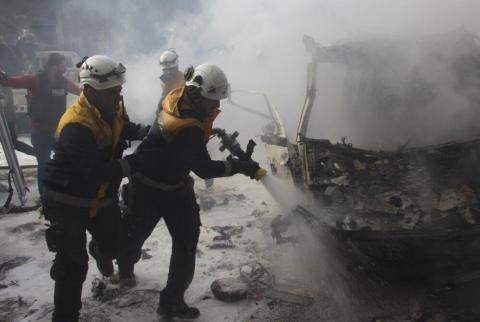 Turkey's foreign minister on Jan. 22 said the Syrian regime's attacks in the last rebel-held enclave of Idlib are "unacceptable" and called on Russia to abide by a recent ceasefire brokered by Ankara and Moscow as a guarantor state.

"The [Syrian] regime's attacks on civilians, without any discrimination, are unacceptable. We expect Russia to commit to the ceasefire's pledges as the regime's guarantor," Mevlüt Çavuşoğlu said at the 50th annual meeting of World Economic Forum in Davos.

The minister's remarks came at the "Geopolitical Outlook: The Middle East and North Africa" panel when he was asked about Turkey's relations with Russia.

But the different perspectives of Ankara and Moscow do not pose an obstacle to cooperate on significant issues, according to the top diplomat. He also added that Turkey is in dialogue with Iran as well concerning matters on Syria.

Stressing that there are many problems in the Middle East such as the Israeli-Palestinian conflict, the war in Syria and problems in Libya, Yemen and Iraq, Çavuşoğlu said that Turkey is "actively" showing effort to solve these problems.

On Libya, Çavuşoğlu said that the main issue is the Tobruk-based commander Khalifa Haftar.

"He neither signed the joint declaration in Moscow nor committed to an overt support in Berlin. The legitimate government of [Prime Minister Fayez al-] Sarraj was constructive and declared support," he said.

Regarding the troops Turkey sent to Libya,...

Migrant Convoy in Serbia Turned Back at Hungarian Border