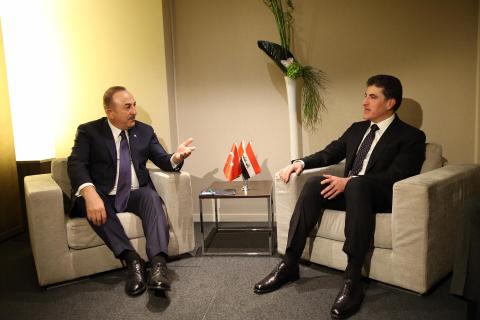 The closed-door meeting took place on the sidelines of the World Economic Forum in Davos, Switzerland where the two leaders discussed heightened tensions between the U.S. and Iran, according to diplomatic sources.

The death of top Iranian general Qasem Soleimani in a U.S. airstrike in Baghdad has marked a dramatic escalation in tensions in the region.

During the meeting, Çavuşoğlu expressed Ankara's solidarity with Iraq which is playing an active role in defusing tensions, said the sources, who asked not to be named due to restrictions on speaking to the media.

He reiterated the need for all ethnicities in Iraq to work together for a peaceful future, adding that Turkey will continue cooperating with the KRG.

After the meeting, he tweeted: "We evaluated Turkey's excellent relations with brother Azerbaijan on the basis of 'two states, one nation', felt the warmth in the cold weather of Davos. We also conveyed the greetings of Turkey's President Recep Tayyip Erdogan."

He also attended the Diplomacy Dialogue on Western Balkans Meeting which was also closed to the press.

Following the meeting, he tweeted: "As a Balkan country, we greatly care for stability in the Balkans and safety of our brothers, sisters. EU should keep its promises to the countries in the region and be inclusive."

He drew attention to Turkey's Asia Anew initiative at the New Vision for Eurasia Meeting, noting that Asia is becoming the hub of economic activities in the 21st century.