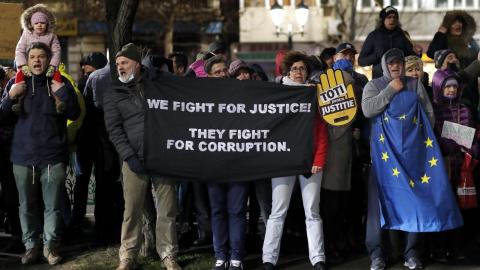 Both declined from last year, when Bosnia was ranked in 89th place, with 38 points, and North Macedonia came in 93rd place, with 37 points.

Bosnia shares its 106th place with Albania, which also declined in the rankings. It came in 99th place last year.

The scores for its eastern and southern neighbours, Serbia and Montenegro, did not change.

Serbia, however, fell in the rankings from 87th to 91st place, while Montenegro slightly improved its position, moving up from 67th place in 2018 to 66th place in the 2019 list.

Moldova scored worst in the whole of Southeast and Central Europe. With 33 points, it ranked in 120th place on the list.

Greece, on the other hand, saw the biggest improvement in Southeast Europe, scoring 48 points and ranking in 60th place.

This year's Transparency International report also compared the latest results with those from 2012. In that context, in the Balkans, Bosnia's result again appeared concerning, revealing a consistent decline. "With a score of 36, Bosnia and Herzegovina significantly declined by six points on the CPI since 2012," the report noted.

Turning to Bosnia's specific problems, it noted: "The country also suffers from weak enforcement of campaign finance regulations. During the 2018 elections, political parties and civil society organizations raised concerns over voting irregularities, threats against voters, the misuse of public resources and unequal access to the media."

The organisation divides all countries into six geographical groups:...