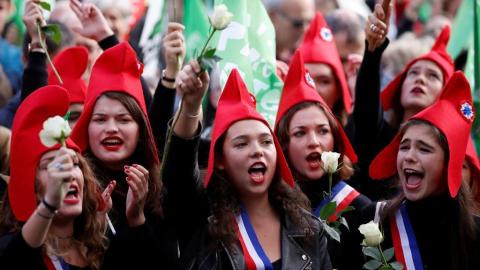 Three hundred protesters stood in the cold in front of France's Senate on Jan. 22 to demonstrate against a bill being reviewed there this week involving assisted reproductive technology.

The latest demonstration comes after thousands of opponents of the controversial legislation took to the streets of Paris on Jan. 19.

Those protesting are part of a movement called La Manif Pour Tous (The Strike For All) whose members are seeking to protect traditional conception but are also against a bill that very much blurs the line between natural procreation and manipulation.

Those against the bill say it amounts to commodifying the human body -- of a fetus -- as medically assisted procreation, or MAP, is about manipulating an egg and/or sperm to produce fertilization, thus choosing the genetic makeup.

Some critics have likened it to Eugenics, the practice of improving the genetic quality of a human population through selective breeding.

Marguerite, 22, a law student at the Sorbonne, waved a flag during the protest.

"The law concerns artificial insemination and genetic selection, but mostly the ability to stop the genome at a point where you can make for the perfect child," she said.

French law currently only allows women in heterosexual relationships to access MAP, but the government plans to extend it to single women and LGBTI+ couples.

Alice, 21, also a law student at the Sorbonne, agreed that the law is extensive and multifaceted and is being showcased as a more fair way for women
to become mothers when in fact there are layers to the new legislation.

"It is presented like a law that will give single women and lesbians the possibility to conceive children," she said. "But in fact, there are many small...