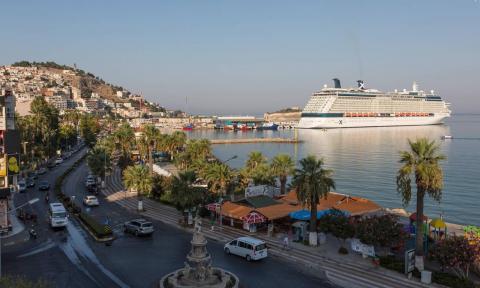 Kuşadası, one of Turkey's main holiday destinations on the Aegean coast, will host 310 cruise ships to visit the town with some 360,000 people on board this year, Aziz Güngör, the general manager of Ege Port Limanı, has told Anadolu Agency.

Last year 194 cruise ships docked at the resort's ports, bringing in around 180,000 visitors, according to Güngör.

Next year Kuşadası will see records in cruise tourism, according to Güngör, who predicts as much as 360 cruise ship visits with up to 800,000 holidaymakers.

The projections for 2021 is an indication that "we are overcoming the troubles strongly and fast," he remarked.

Turkey is a key market for major global cruise operators and the decline in cruise traffic to Turkey over the past two-three years also adversely affected them, he said.

"A pessimistic mood prevailed among businesses and the tourism industry in Kuşaadası following the adverse developments in 2016, but we are hopeful now."