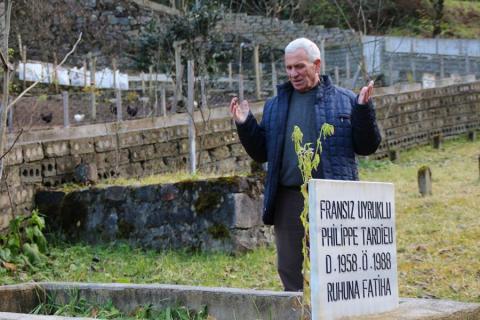 Feridun Altaş is on a trail to find the family of a French mountaineer who died while climbing the Kaçkar Mountains in the Black Sea region 32 years ago.

Altaş, a resident of the Çamlıhemşin district of Rize province, believes bones that he buried in 2000 belong to Philippe Tardieu, whose whereabouts remained unknown for many years after he disappeared.

In 1988, Tardieu disappeared during a climb on the Kaçkar Mountains and was not found despite all the searches at the time.

In 1995, another group of mountaineers, who climbed the area where Tardieu disappeared, came across human bones.

The bones were immediately believed to have belonged to Tardieu, since there were no other missing reports and information in the region at the time. They were placed in the archives of Çamlıhemşin Courthouse in a box following a research carried out.

Altaş then learned at the courthouse that there were human bones in the archive and that they would be delivered to the municipality to be buried, since his family could not be reached.

Altaş took the bones and buried them in his family's cemetery in front of his house. He also built a tombstone for Tardieu and launched a struggle to reach the mountaineer's family.

He also made applications to the French diplomatic missions in Turkey, but failed to get any results.

"I wanted him to have a grave. According to the document from the forensic medicine, his estimated age was 30. Based on the year he died, I built a tombstone that shows his birthday as 1958," Altaş said.

He stressed that he has been applying to the French authorities for 20 years but has not achieved any results so far.

"I'm calling on French citizens to help us, reach out to us in a way so that we can...