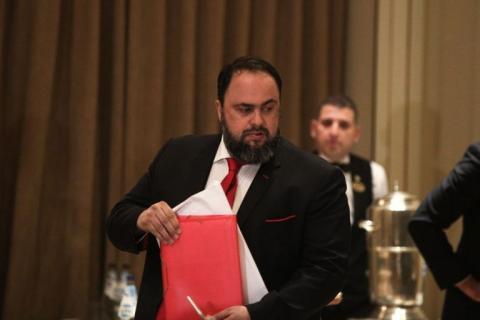 Everyone knew that he was going to speak about all the problems. Besides, everybody knows that it was Olympiacos that initiated this debate and brought to the fore all the forms of corruption and immorality associated with Greek Football.

Moreover, it was Olympiacos that turned the spotlight on all those that believed that they could continue to operate beyond any control and beyond the limits of the law. In this sense the meeting of the owners of the 'Big Four' FCs was an opportunity to state important facts.

The meeting took place in front of UEFA, FIFA and the vice-minister responsible for Sports, Lefteris Avgenakis. And the debate was about the problems of Greek Football with Marinakis making an extensive presentation in from of the representatives of international Federations and Lefteris Avgenakis.

The leading figure of Olympiacos deconstructed the so-called 'Clean Up' of Greek Football and stressed the responsibility of all those associated with the problems of Greek Football. H openly attacked the president of the Greek Football Federation (EPO), Vangelis Grammenos, mentioning many examples in regards to what goes on in the Federation.

Marinakis stressed the importance of the multiownership case, and noted that the government cannot step back in the name of political cost calculations. He exposed the inconsistency of the allegations of Ivan Savvidis's lawyers that Savvidis does not exercise any control upon PAOK. He talked about the 'ties that bind' all the member of the Central Refereeing Committee and in particular Pereira and asked for all of them to be replaced.

Here is the full statement of Vangelis Marinakis at the meeting:

Today we haved gathered here to discuss all aspects of the current...