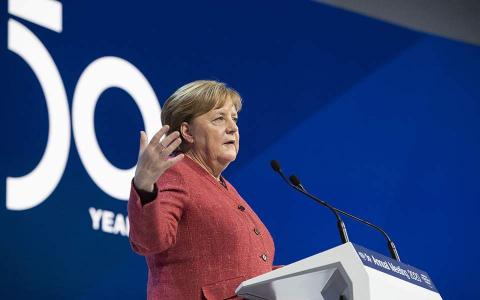 German Chancellor Angela Merkel has praised the Greek government's reform drive while defending Berlin's austerity prescription during the years of economic crisis.
"Greece today has a prime minister who is implementing really intensive reforms," Merkel said Thursday at the World Economic Forum in Davos, Switzerland, adding that the economies of Portugal and Ireland had regained their competitiveness.
"This is a result of this tough [austerity measures], but also of our willingness to help and open a big rescue umbrella," she said.
Meanwhile, during a panel discussion on "Europe's Green New Deal" in Davos, the Greek premier received praise for his environmental sensibilities.
"I heard through the grapevine that you are the 'greenest' prime minister Greece has ever had," panel moderator Penny Abeywardena said.
"Guilty, I said this," quipped Frans Timmermans,...