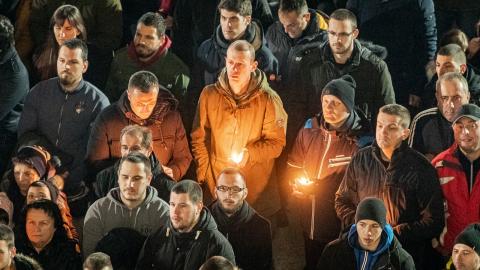 As protests continue in Montenegro over the recently adopted freedom of religion law, the government and Serbian Orthodox Church have both called for talks on resolving the dispute.

The bishops' council of the Church said it was ready for talks that fully respected both sides' views. "If the Montenegrin authorities want to impose solutions on their own and call for talks only on implementation of the law, we will consider it a fake dialogue," the bishops said in a statement.

But they added that the Serbian Orthodox Church, SPC, remained "interested in Montenegro having best possible law about religious communities in its legal system".

Since Montenegro's parliament passed the law on December 27, tens of thousands of priests, believers and supporters of the Church have been protesting twice a week across the country, demanding its withdrawal. Supportive rallies have also taken place in neighbouring Serbia.

The disputed centres on the fact that the law stipulates the creation of a complete register all religious buildings and sites that were owned by the independent kingdom of Montenegro before it became part of the Serb-dominated Kingdom of Serbs, Croats and Slovenes, later renamed Yugoslavia, in 1918.

Religious communities must provide clear evidence of ownership of the sites to retain them - a provision that the SPC - by far the largest faith group in the country - says is designed to strip it of its holdings. The government denies this.

While both sides have held fast to their standpoints, Prime Minister Dusko Markovic on Wednesday said that by the end of this week he will formally seek talks on the law with the Church's senior bishop in Montenegro, Metropolitan Amfilohije.

Markovic said that it was impossible to...