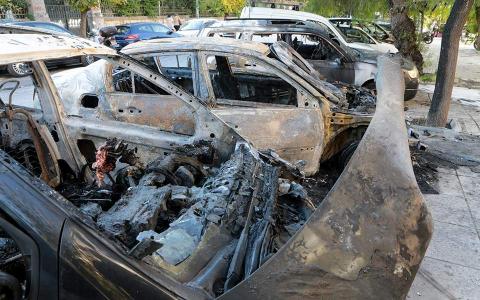 Nine people were detained on Thursday following a fourth day in a row of arson attacks on cars in central Athens.

According to the police and fire service, four cars were torched at 3.40 a.m. on Karachristou Street, in the district of Kolonaki, three of which were completely destroyed and the fourth was seriously damaged.

Firemen were called in to put out the blaze.

The case has been assigned to the State Security.

The latest incident comes at the back of a barrage of similar car burnings in the suburbs of Maroussi and Agia Paraskevi. In the past week, about 40 cars have been torched around Athens.

On Wednesday, Citizen Protection Minister Michalis Chrysochoidis held a meeting with the heads of Attica's five directorates, senior officials from State Security and counter-terrorism in Greek Police's headquarters GADA to discuss the problem.