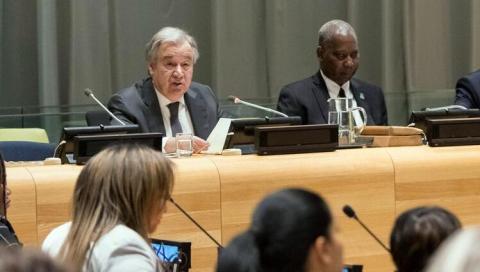 United Nations Secretary-General Antonio Guterres painted an apocalyptic picture of global relations on Jan. 22 and warned of modern-day versions of the "four horsemen" in a wide-ranging speech to diplomats.

"I see four horsemen in our midst -- four looming threats that endanger 21st-century progress and imperil 21st-century possibilities," Guterres told the 193-nation body in what amounts to his New Year message. The four horsemen of the Apocalypse in the Bible represent pestilence, war, famine and death.

"Devastating conflicts continue to cause widespread misery. Terrorist attacks take a merciless toll. The nuclear menace is growing. More people have been forced from their homes by war and persecution than at any time since the Second World War."

Guterres spoke as his UN colleagues warned about the safety of more than 3 million civilians in rebel-held Idlib, in northwestern Syria, where a government military offensive is aimed at clawing back territory in the country's brutal civil war.

In recent days, the UN chief has also been working with Germany and other powers to hammer out a peace plan to stop governments arming Libya's militias and bring an end to the violence that has plagued the north African oil exporter.

Guterres told of an "existential climate crisis" and rising temperatures melting polar ice caps, threatening life and pushing the planet "closer to the point of no return," while policymakers are sitting on their hands.

"Scientists tell us that ocean temperatures are now rising at the equivalent of five...