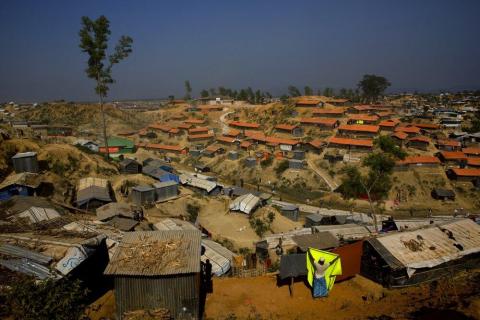 In a sweeping legal victory for members of the Rohingya Muslim minority, the United Nations' top court on Jan. 23 ordered Myanmar to take all measures in its power to prevent genocide against the Rohingya people.

The court's president, Judge Abdulqawi Ahmed Yusuf, said the International Court of Justice "is of the opinion that the Rohingya in Myanmar remain extremely vulnerable.''

The court added that its order for so-called provisional measures intended to protect the Rohingya is binding "and creates international legal obligations" on Myanmar.

At the end of an hour-long sitting in the court's wood-paneled Great Hall of Justice, judges also ordered Myanmar to report to them in four months on what measures the country has taken to comply with the order and then to report every six months as the case moves slowly through the world court.

"The ICJ order to Myanmar to take concrete steps to prevent the genocide of the Rohingya is a landmark step to stop further atrocities against one of the world's most persecuted people," said Param-Preet Singh, associate international justice director of New York-based Human Rights Watch.

"Concerned governments and U.N. bodies should now weigh in to ensure that the order is enforced as the genocide case moves forward.''

The world court order for what it calls provisional measures came in a case brought by the African nation of Gambia on behalf of an organization of Muslim nations that accuses Myanmar of genocide in its crackdown on the Rohingya.

At public hearings last month, lawyers for Myanmar's accusers used maps, satellite images and graphic photos to detail what they call a campaign of murder, rape and...